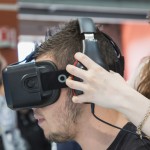 Using virtual reality (VR) in stroke rehabilitation is becoming increasingly popular for a number of reasons. It has the potential to provide the patient with safe environments which can be tailored to meet their needs, it can make boring repetitive tasks more engaging and interesting, and performance can be recorded allowing specific and measurable goals to be set.

VR also offers a variety of mechanisms for therapeutic gain including the repetitive practice of movements, engaging in problem solving, memory and attention tasks. However, attempts to assess the effectiveness of VR therapy have previously been hampered by a lack of high quality studies.

Lohse and colleagues have now partially remedied this in their latest review and meta-analysis.

As well as updating the literature they set out to compare interventions that had used custom built VR systems to interventions that used commercial games that are available on systems such as the Nintendo Wii or Microsoft Kinect.

Additionally, they set out to explore how VR therapies affect different outcomes according to the International Classification of Function, Disability, and Health (ICF).

The ICF provides a comprehensive framework for assessing the impact of health and disability on the functioning of an individual. Using it to categorise the outcome measures from the different studies included in this review was a novel approach and a real strength of this work. Very few published studies investigate the efficacy of commercial games that are available on systems such as the Nintendo Wii or Microsoft Kinect.

The authors noted a number of limitations including:

The limitations listed by the authors were all valid but in my opinion there is a larger issue associated with VR therapies that needs to be addressed before we can understand the value of this new tool.

This relates to the fact that VR systems are interactive computer generated simulations of the real world whereas VR therapies involve clinicians and therapists making decisions about the person’s ability to interact with the VR system, the types of VR tasks that are the most appropriate, frequency of use, rates of progression etc.

These critical aspects of designing and implementing VR interventions are rarely, and poorly, described. In this respect it would have been a useful addition to this review if the authors had also rated the studies on the seven core elements of VR-based interventions that were described by Lange et al. in 2012.