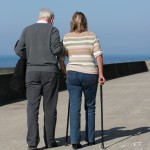 Electromechanical devices for gait training are distinguished from treadmills by being automated and weight supported, and their purpose is to provide high intensity practice whilst reducing the need for input from therapists.

This systematic review by Mehrholz and Pohl, published in 2012, comes on the back of recent Cochrane reviews by the same authors on the use of electromechanical devices for gait training stroke survivors. The Cochrane review showed a generally positive effect of these devices on walking rehabilitation and hinted at a possible difference according to the design of the device, hence this further analysis.

In this latest review the authors compared two types of walking trainers:

The purpose of this study was to use existing data to compare these two different types of gait trainer to see if they differed in terms of patient outcome. Can robots help in rehabilitation?

The authors followed a set protocol for identifying studies where initially 1643 papers were retrieved, but this was soon whittled down to 18 randomised studies (representing 885 patients) when duplicates and low quality papers were removed. Of those 18 four were abstracts or conference proceedings.

Comparing walking performance at start and end of the training intervention showed a statistically significant improvement in rates of independent walking for patients who had used the end-effector trainer (p = .003), but not for those using the exoskeleton trainers (p = 0.4).

However, there was a significant difference in the walking ability at baseline. Significantly more folk in the exoskeleton studies were already able to walk independently compared to end-effector studies (68% vs 18%). In other words, the people using end-effector systems had more scope for improvement.

This suggested a ceiling effect for patients using the exoskeleton trainers where the majority could not improve any more on the FAC scale because they were already independent walkers at the start of the study.

A further point to note was that mean time since stroke ranged from 11.6 to 14.6 months for the patients in the included studies, and it could be argued that greater effects would be expected for both types of trainers when used  acute/sub-acute phases of recovery.

The authors point out the limitations pooling data that was originally compared with controls which may not have been matched on intensity although they felt there was, generally, a similarity. However,  a noteworthy problem that was not addressed in the analysis was the lack of recording of intensity of walking, i.e. the number of steps taken. Had these data been available a dose – effect analysis could have been undertaken.

Despite these limitations the authors posited some theories for their findings, such as exoskeleton trainers constrain the natural movement, particularly at slow speeds, which may cause differences in the spatial and temporal muscle activation patterns when compared to over-ground walking and  may limit the overall learning experience. Overall though they concluded that their findings should be interpreted with caution.

Personally I think the movement patterns that people make when using trainers and treadmills can become stable and unchanging whereas normal walking involves continuously changing direction and speed and alterations in posture, never mind anticipating unfolding events and dual tasking.

My own opinion is that these devices might be useful in acute stages of recovery to help establish basic movement patterns but would need to be supplemented with over-ground walking. They might also be useful from a motivational perspective during early recovery.  What this review tells us though is that more work needs to be done to establish which device is best and who they are most suitable for.